Cherry Blossoms in Victoria BC 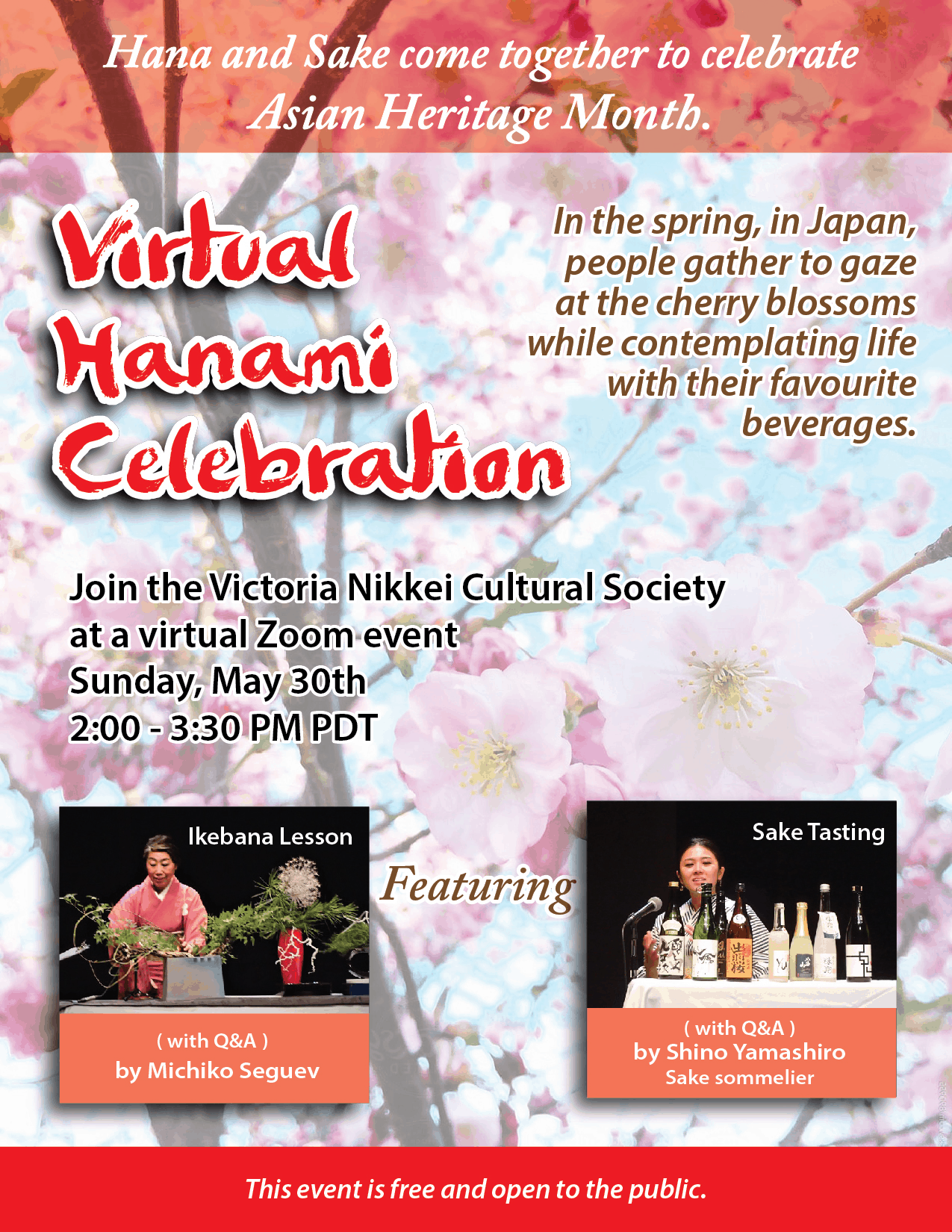 In celebration of Asian Heritage Month, the VNCS will be holding a virtual event over Zoom:

Recording of the Virtual Hanami Celebration

If you have anything you’d like to ask our presenters, send your questions to info@vncs.ca prior to or during the presentations. We will do our best to have them answered during the event.

Michiko Seguev– originally from Tokyo, she started to have a strong interest in Ikebana in her early childhood as she accompanied her mother to her (Mother’s) Ikebana lessons at Ohara School. Later on at her work in an advertising agency, her passion for Ikebana was rekindled when she had a chance to arrange flowers for work.  She resumed studying Ikebana under Sōraku at Sōgetsu School and obtained a teaching certificate. She has been teaching Ikebana since her arrival in Victoria and providing VNCS Ikebana classes for more than 15 years.

Shino Yamashiro – Shino is a sake specialist, certified as an International kikisake-shi by SSI (Sake Service Institute in Japan) and a menu developer at “E:ne raw food + sake bar”, where more than 50 selections of sake are served and is the very first “sake bar“ in Victoria. Shino was very much inspired and fell in love with the unique world of sake 4 years ago. Shino found that many local guests love wine and also have a great curiosity towards sake when she introduced them to all the breadth and complexity that sake has to offer. Introducing sake and making it more approachable to people became her passion. She wants to encourage people to enjoy sake “as is” or by pairing with varieties of food, not just Japanese food. Shino hopes that a sake menu becomes more and more popular at restaurants.

Shino will be sampling two types of sake during her presentation:

Pick up one or both bottles ahead of time and taste along with her from the comfort of your home! Check for local availability using the “Where to buy” button in the BC Liquor Store links provided.

We encourage you to help support our community however you are able, perhaps by ordering take-out from your favourite local restaurants, making a donation to the VNCS, or simply attending as we celebrate Asian heritage and culture this May. 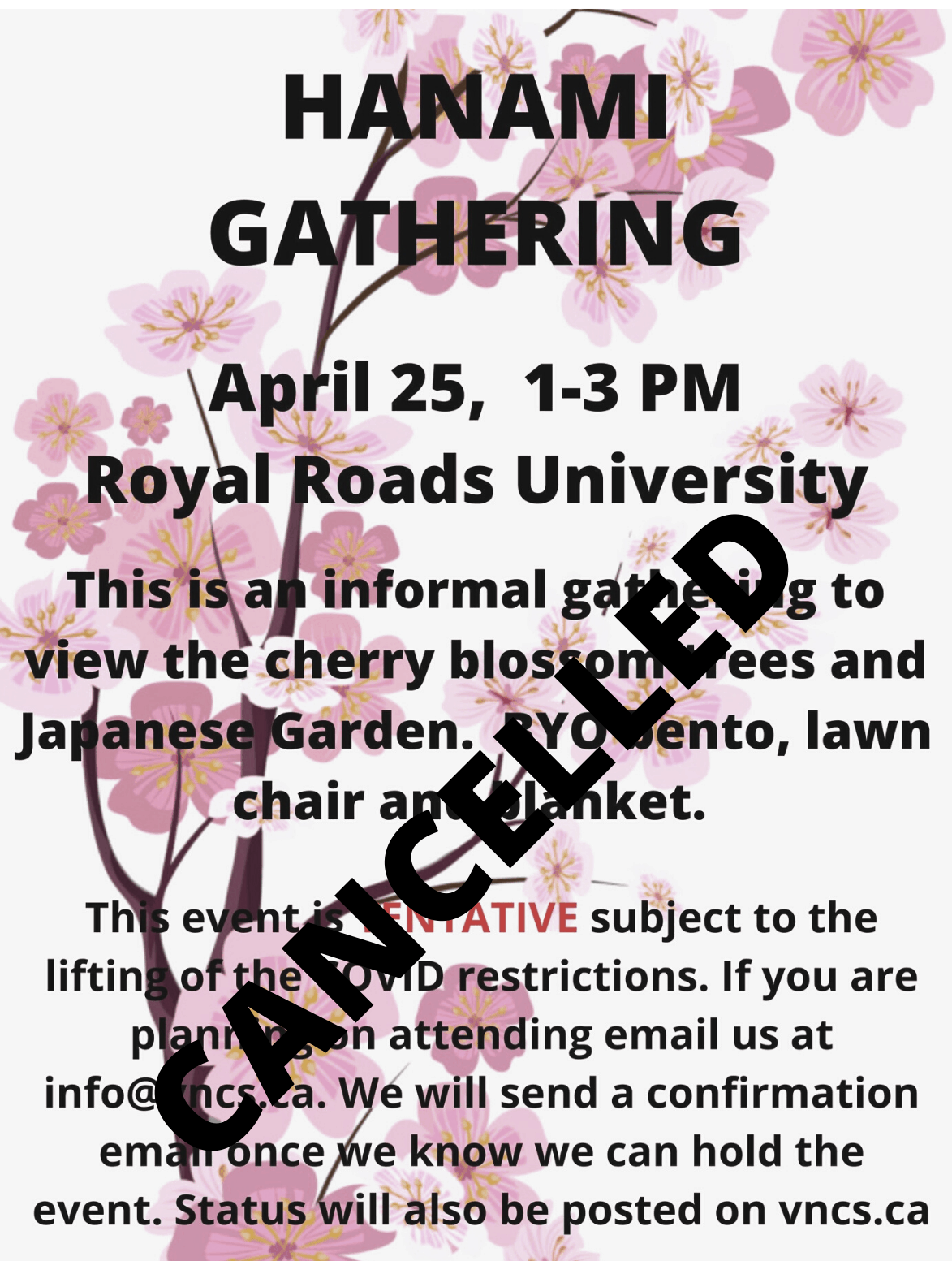 All ages, everyone welcome! Join us for an afternoon of art making, performance and poetry!

A collaboration with the Art Gallery of Greater Victoria, Victoria Nikkei Cultural Society, City of Victoria and Haiku Arbutus. With support from Silk Road Tea, Jaga Silk and Ume Silk. Admission by donation for this special Family Sunday.

VOLUNTEERS NEEDED: Please contact Yukari Peerless at yukaripeerless@gmail.com if you can help at the Cherry Blossom Festival. Many hands make light work! We thank you in advance.

In the past, the VNCS has organized a spring potluck lunch and cherry blossom (Sakura) viewing get together. There are many streets in Victoria where different types of cherry blossoms can be seen from early to late spring. Ann-Lee and Gordon Switzer are local sakura tree experts and Ann-Lee has prepared a guide (see below) to viewing sakura trees in Victoria. We are in her debt. 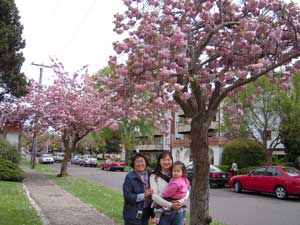 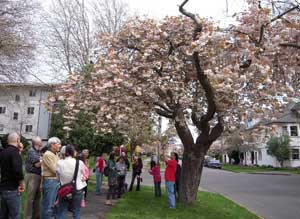 The blooming time of ume and sakura varies from year to year, sometimes by two weeks. Also blooming times overlap, and windy weather can shorten the beauty. If the winter has been cold and extends into late February, wait a little while! This list is not exhaustive; There are other trees but these are the main ones.

There are four Autumn Flowering Sakura (Prunus subhirtella ‘Autumnalis’) on the sidewalk in front of the Crystal Gardens on Douglas street between Belleville and Burdett.

This small deciduous flowering tree originates in Japan, but is unknown in the wild. It is probably of hybrid origin between Prunus incisa and Prunus spachiana. It is widely grown for its propensity to flower during mild winter weather which makes it perfect for a city like Victoria.

There are five Wada (Prunus wadai, Prunus pseudocerasus x Prunus subhirtella) Sakura trees (three on the law court side and 2 on the opposite side) on Blanshard St. between Burdett Ave. and Courtney St.

There are lots of Lindsay (Ume) Plum (Prunus cerasifera Lindsayiae) on View St (the most spectacular between Blanshard & Cook). Very earliest of the blossom trees. Comes out anywhere from late Jan-early Feb. to mid Feb. or even March some years.

Both Pissard and Nigra are very common on the city streets and private gardens. In James Bay: Ontario, Montreal, Quebec, Niagara, Croft and many others.

Both Pissard and Nigra are very common on the city streets and private gardens. In James Bay: Ontario, Montreal, Quebec, Niagara, Croft and many others.

BEACON HILL PARK has many, many beautiful sakura and plum trees at this time: go enjoy!

Most famous is South Turner Street in James Bay, but common throughout the city. Moss Street and Trutch Street have many old examples as does Heywood Avenue that borders Beacon Hill Park on the east side. 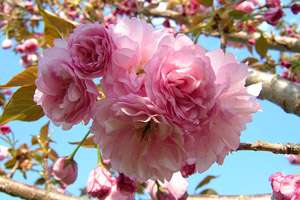 Menzes Street &
Moss Street among others. These are the deep pink fully double “popcorn” type that scatter “pink snow” far and wide. 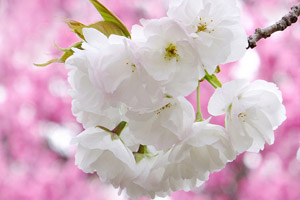 In front of Hotel Grand Pacific

Opposite MacDonald Park, James bay, in front of the school in full bloom. 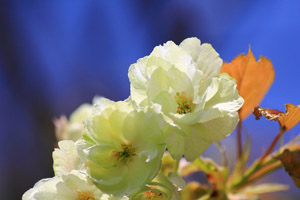 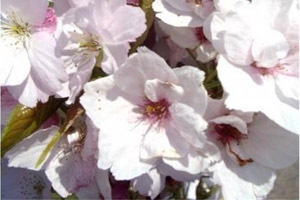 Quadra Village and other locations around city, they all seem to have been planted the same time.

Possibly the latest blooming sakura ever!

Irving Park in James Bay. 21 trees of were planted in 2002 by a group of visitors from Gifu, Japan. A plaque tells about it. Not in bloom till May, pinky-white doubles, bronzy leaves.

Donate to the VNCS

The Victoria Nikkei Cultural Society is located on and works in the traditional territories of the Lekwungen (Songhees and Xwsepsum Nations). We extend our appreciation for the opportunity to live and learn on this territory.